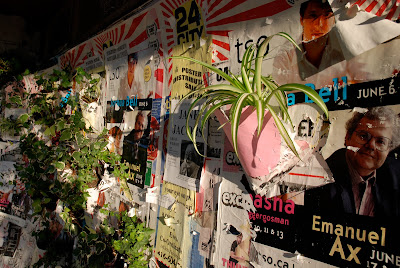 Although we haven’t posted any updates for while now, some of you may have noticed additions to the gallery. Rest assured, we’ve both been busy and new pockets have been planted since last we wrote. However, updates will probably continue to be sparse for at least the next several weeks, if not longer. I’m hoping to have more time to devote to the blog again by late December.

The planting season for the year in Toronto is essentially over for us because of the cold weather. In fact, we decided bring inside plants we put out on Harbord to save them from the frost. It was fantastic to see that this wall lasted for well over a month before we relocated the plants. They even survived through Nuit Blanche.

Again we remain busy putting other work out around the city, both individually and in collaboration, so keep an eye out.

Late Night in the Bedroom

The first full episode of Late Night in the Bedroom, Toronto’s new late night live audience talk show, is now online. Despite that our tendencies to be a bit camera shy, we were honored last week to appear as guests on this inaugural episode alongside Che Kothari, and Boys Who Say No.

Thank you again to the whole LNB crew. Here’s a link and description from their website:

Late Night in the Bedroom is a brand new late night live audience talk show, featuring Toronto’s freshest local artists, musicians and cultural players. A side project of Whippersnapper Gallery, the show takes place bi-monthly with the aim of expanding public dialogue around the art we see, hear, and create, as well as supporting the ongoing development of our creative community.

On August 26th, Late Night in the Bedroom, Toronto’s brand-spanking new arts and culture talk show premiered in front of a live audience with a wildly exciting lineup of guests. The show’s guests included the extremely prolific hip-hop photographer Che Kothari, who talked about his work as well as Toronto’s Manifesto Festival, which he helped found and currently directs. Guerilla gardeners Sean Martindale and Eric Cheung, otherwise known as the “Poster Pocket Plant Guys”, discussed their delightful street interventions. Finally, musical guest Boys Who Say No, graced Late Night in the Bedroom’s apartment studio with a set of their quirky and unpredictable indie pop rock."

Thank you to the staff over at GreenMuze for posting about our project today as well. They report sightings in Halifax and Vancouver... I planted some in Vancouver with friends earlier this month, but if anyone has more info or images for the Halifax planters we'd love to hear more about it!

Thank you also to Julien Cordelle from France for posting an article about our project in French on his "Slowest - A Slower Blog" site. Apologies for the delay in uploading this link. You can check it below:

Thank you to architect Felipe Garcia Riesco from Santiago Chile for posting an article about our project in Spanish on his verdecuidad.com site. You can check it out at the link below:

Arrived back home after planting this morning to find that inhabitat.com posted about our project yesterday. The article has also since been dugg on digg.com.

Thanks to Olivia Chen for writing the article!

We seem to be perpetually behind on updating our blog, but thanks for bearing with us. More details and photos from both Vancouver and Toronto will be put up when we get a chance. If you've been checking back, you will probably have noticed that we don't post all of our planting excursions, mostly for lack of time. Meanwhile, you may have also seen the slideshow now rotating on the site. It links to a gallery of images if you would like to see any at a higher resolution.

Links to more photos and information

Sean & Eric
Two guys trying to activate public space - attempting to engage with urban environments. contact us at: sean.martindale@gmail.com OR info@at-aw.com and check out www.at-aw.com for other cool stuff.